With my brothers in halloween 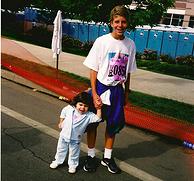 My name is Gabi Ury. I was born on April 17, 1998 in Boulder, Colorado. My Dad is American and my Mom is Brazilian and grew up in São Paulo. I have two older brothers, Chris and Thomas. I have a Havanese puppy named Mia who loves to hike in the mountains around our house.

When I was born, my parents found out that I had special needs. I was born with VATER syndrome. VATER affects my spine, muscles, and limbs. I have pretty serious scoliosis and am missing some of my muscles (calf, gluts, and part of my abs). I have had 14 major surgeries in order to live a healthy, happy life. My first surgery was at 4 months on my spinal cord. 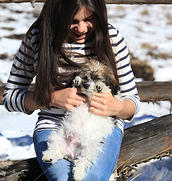 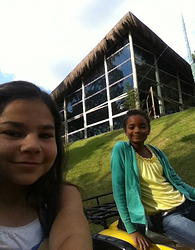 With my friend Lia

Around fifth grade, I became very interested in breaking a Guinness World Record. I applied for many and attempted a few. In sixth grade, my friend Leah and I attempted the Longest Hopscotch Course in my driveway. It wound around and around and we got to 1000 squares. Another record I attempted was Most Socks on One Foot. I got 60 socks on my left foot, but unfortunately I was still maybe 15 socks off.

In August 2013, I was trying out for my school’s volleyball team. When everyone else was running the mile, my coach told me to do the plank exercise instead, since I can’t run well. When everyone had finished running, it had been 12 minutes and I was still doing the same plank. I went home that night and I applied for the Guinness World Record for Longest Abdominal Plank (Female).

With my parents and brothers

About six weeks later, I received an email back from the people at Guinness World Records stating the current record, correct form, evidence required, etc. In November, I underwent surgery and spent the next month and a half recovering. In early January 2014, I started training and the first day I got to 20 minutes. My record before officially attempting the plank was 60 minutes.